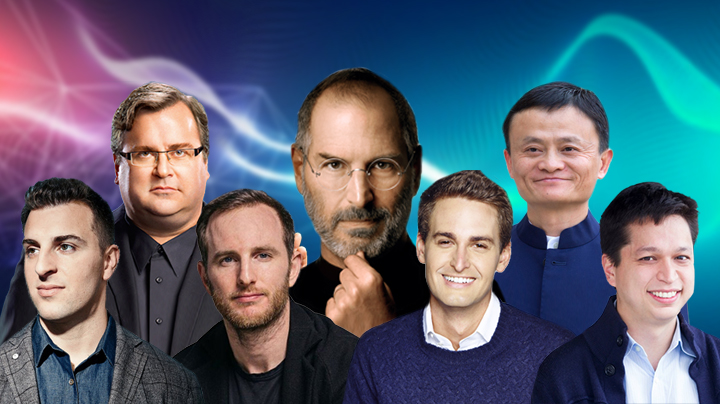 Not all tech companies are founded by tech experts. Others are created by non-technical entrepreneurs who had the idea but did not have the means to produce it. A non-technical founder refers to a person with no formal training or education related to the development of a product or service.

Most were able to build a tech company by co-founding with a Chief Technical Officer and gradually grow their tech team. Partnering with a trusted technical person made them focus on developing their product and building their brand. Know the story behind the creation of big tech brands by its non-tech founders.

As a child, Jobs always had an interest in electronics. He attended Reed College and dropped out just after one semester to travel to India and study Zen Buddhism. After seven months, he returns and works at Atari to create a circuit board for the arcade game called Breakout. Jobs worked on the circuit board with Steve Wozniak who later invented the Apple I computer. Jobs suggested selling it and co-founded Apple Computer with Wozniak.

Steve Jobs handled building the business, looking for investors and selling the product while Wozniak showed up with his latest code. Jobs and Wozniak’s ingenuity paved way for the invention of the Macintosh, iPhone, and other Apple products we know and use today.

Before becoming a billion-dollar business magnate, Jack Ma went through 30 job rejections before reaching success. He started as a University English lecturer but later applied for a career shift but was rejected. In 1995, he was introduced to the internet in the US and saw the internet’s potential after creating a Chinese-related website with his friend. This sparked the creation of “China Yellow Pages”, a company creating websites for companies launched in 1995. In just three years, the company already made $800,000.

Mind you, Jack Ma never coded nor made a sale to a customer. He's one of the non-tech founders who got a lot of help from his friends in the US. Eventually, he headed an IT company in China, resigned, and founded Alibaba in 1999, a business-to-business online marketplace. After 19 years, Alibaba is now a multinational e-commerce, retail, internet, AI, and tech conglomerate with a market value of $527 billion as of January 2018.

With a degree in BS Symbolic Systems and Cognitive Science, and a Master of Studies in Philosophy, Hoffman wanted to make an impact and saw the academia as an opportunity for influence. However, he later saw that software had a wider reach and decided to become a tech entrepreneur. He started an internship in a winery in Napa Valley called Inglenook, and networked his way to a job working on eWorld in Apple Computer. According to an interview on CNN Money, Hoffman started a checklist of all the things he needed to learn to create a startup. He learned software development first in Apple and later went to Fujitsu for product management and business.

Just when the online market was rising, Hoffman left Fujitsu and co-founded his first company in 1997 called SocialNet.com, an online dating and match up site. He later left SocialNet and joined PayPal as an Executive Vice President for Business Development. After it was acquired by eBay, Hoffman co-founded LinkedIn in 2002 with two colleagues from SocialNet who were mostly in charge of the product development. His experience in PayPal made him interested in the professional landscape as he saw the world of work change. By 2014, the online business social network had over 332 million users.

Both co-founders Brian Chesky and Joe Gebbia majored in Industrial Design. As a means of paying for their rent after moving to San Francisco, the two roommates and former schoolmates put an air mattress in their living room and turned their loft into a bed and breakfast. What was supposed to be a short-term business to pay off the rent became a full-time business venture which they called AirBed & Breakfast. They were joined by Chesky’s former roommate Nathan Blecharczyk, a Computer Science graduate, who became the Chief Technology Officer. Since the non-tech founders have no programming background, Blecharczyk’s role was major to building the site. In 2009, the name was shortened to Airbnb and their service has since expanded from room spaces to various lodgings and properties. As of 2017, Airbnb’s net income is at $93 million.

Evan Thomas Spiegel proposed the idea of Snapchat in a class while studying product design at Stanford. His idea was ridiculed in class but continued to develop and co-found the idea with classmates Bobby Murphy who became the CTO, and Reggie Brown. Months before graduating, Spiegel dropped out of college to focus on the app and was able to release an app called Picaboo. However, after a few months, Brown was later ousted from the team by Spiegel and Murphy.

Despite the controversy with Brown, the Spiegel-Murphy team re-launched Picaboo as Snapchat successfully making it a widely popular app, especially for teens. Spiegel focused on the product design and business side, while Murphy took care of the technical side. In a 2012 blog post, Spiegel says their company’s mission is “about capturing the traditional Kodak moment. It’s about communicating with the full range of human emotion -- not just what appears to be pretty or perfect.” As of September 2016, Snapchat Inc. was renamed to Snap Inc. with the news that they now offer smartglasses.

Coming from a family of doctors, Silbermann was on his way to a path in medicine when he decided to do business in his junior year. He got a job as a consultant in the firm’s IT group doing spreadsheets all day. He later moved to California and landed a job at Google as customer support because he was “more excited than the previous applicant.” Silbermann later resigned because Google would not let him build products. He partnered with his friend in college, Paul Sciarra, and launched Tote, a mobile catalogue.

Eventually, Silbermann and Sciarra steered away from Tote to Pinterest. Silbermann was always interested in the idea that the things you collect say so much about who you are which sparked the creation of Pinterest. Eventually, he met Evan Sharp, an architect who was a friend of a friend. The two decided to work on Pinterest with Sharp designing and coding the grid design Pinterest is known for. The moment users figured out creative and functional ways to use the site was the moment Silbermann thought they have “got it.”

Inspired to create your own tech startup? Let Cloud Employee help you make that a reality. Learn how Cloud Employee works, see our Developer Pricing Guide, or talk to us. You can hire dedicated offshore developers with us across many technologies.