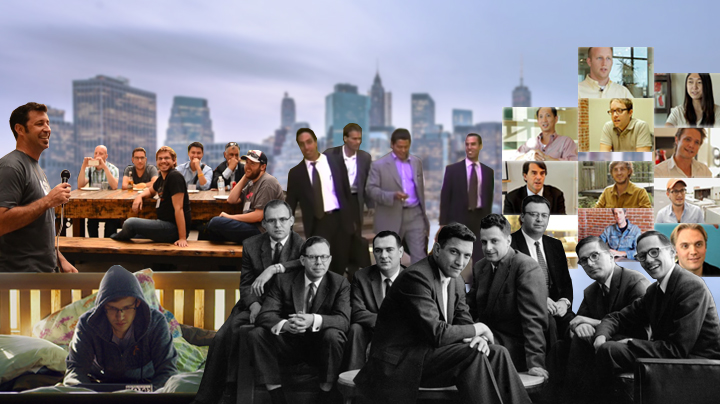 What does it mean to start a business on an idea? What does it take to run it - make it real, make a change, or simply make it?  Here are five startup documentaries to start you off.

Set in 1999 to 2001 just as the internet was taking off, Startup.com covers the rise and fall of a startup. What if there’s a website designed to connect people with their local municipalities? The idea is compelling enough that founder Kaleil Tuzman quits his job at Goldman Sachs to start govWorks.com with Tom Herman, his friend since high school.

The film’s co-director Jehane Noujaim is Tuzman’s Harvard roommate and was able to get an inside look at the fundraising and launch of govWorks.com. With A-list board members that included the Chase Manhattan Bank and Mayfield Fund, the startup was so promising that it raised $60 million USD in funding. What follows is a cautionary tale as govWorks and the team behind it crashed and burned their way through the dot.com meltdown.

A documentary about the founding of the venture capital industry, Something Ventured tells the stories of early investors and innovators whose early ventures in the 60s up to the 80s have made the Silicon Valley what it is today. The film gives an admiring view of the early VCs who back up startups like Atari, Apple, Cisco, Genentech, Intel, and Tandem.

Featuring VCs such as Don Valentine, Bill Draper, Tom Perkins, Arthur Rock, and entrepreneurs such as Gordon Moore, Sandy Lerner, and Robert Campbell, Something Ventured spotlights the founding and funding of early upstarts that have become today’s tech giants.

“Everything you’re doing is basically something you’re just barely qualified for or not qualified for. It’s like jumping off the cliff and having to build your own parachute,” said Drew Houston, Dropbox’s founder, and one of the many young founders featured in The Startup Kids. Houston’s words captured the experience of young web entrepreneurs, a few of whom are just in their teens.

Made by two Icelandic filmmakers who are entrepreneurs themselves, Vala Halldorsdottir and Sesselja Vilhjalmsdottir, the film started from a simple idea: meet and sit down with successful tech founders and talk about entrepreneurship. The Startup Kids features interviews with the founders of Vimeo, Soundcloud, Dropbox, InDinero, Kiip, Foodspotting and other young founders in the US and Europe.

Observing that the tech businesses in the Waterloo region in Canada are different in that, they inspire collaboration instead of competition, filmmaker Tyler Jackson decided to document it. He then launched a successful crowdfunding campaign on Indiegogo to enter the documentary into various film festivals.

Startup Community presents an alternative view of the startup life. It’s a different world where businesses don’t pursue empire building but instead actively foster their connection to the community where they exist. As one speaker in the film puts it, “In the same way it takes a village to raise a child, it takes a community to build a strong tech company.”

Opening with the assertion that "entrepreneurship among 18-30 year-olds is at a 24-year low,” Generation Startup follows the fortunes and adventures of six recent college grads newly arrived in the city of Detroit to work at new startups or build their own.

Award-winning filmmakers Cynthia Wade and Cheryl Miller Houser shot the film over 17 months, capturing the struggles of their twenty-something subjects who put all their talents and hustle in the front lines of entrepreneurship. The doubts, the long hours, and uncertain future sit side-by-side with the film’s optimistic celebration of risk-taking and diversity of startup life.

Want to build your startup tech team, fast and hassle-free? Let Cloud Employee help. Talk to us, learn how Cloud Employee works, or check out our Developer Pricing Guide. You can hire offshore developers with us across these technologies.