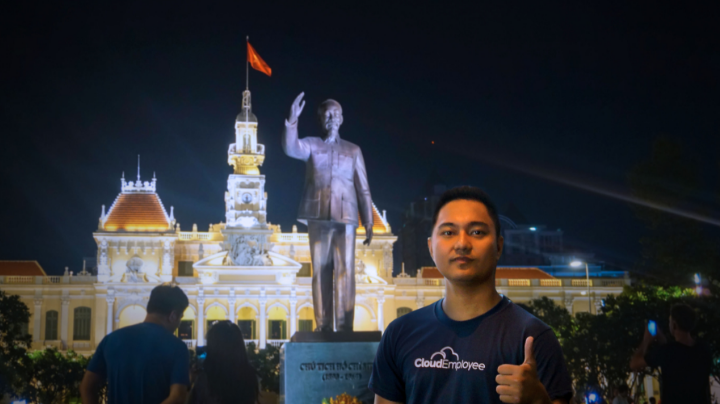 A 2018 study by the Society for Human Resource Management revealed that 92% of employees consider benefits as important to their overall job satisfaction. The same study showed that benefits had an effect on employee retention as well; 32% of employees who were unlikely to find other jobs cited their overall benefits package as a top reason.

This year, IT outsourcing company Cloud Employee has decided to take its perks and benefits to a higher level by awarding some of their developers and IT workers all-expenses-paid trips to different parts of the world.

Among the developers rewarded with overseas trips is .NET developer Jace Maniquis, who has been with the company for more than three years. After hearing the news, Jace was nothing but overjoyed and excited to travel, saying that he was “looking forward to seeing new things and what I may see and realise outside my country.”

According to Cloud Employee CEO Nick Hargreaves, the trip to Vietnam was to reward Jace for his loyalty to the company and his steadily excellent performance.

Inside the Saigon Opera House after watching Teh Dar

The two also took the chance to watch the Vietnamese cultural show Teh Dar play at the Saigon Opera house.

Jace Maniquis has been exposed to a culturally-diverse working environment as a .NET developer at Cloud Employee.

Eager to make the most of the trip, the two also looked for bargains at Ben Thanh market, the largest market in the city, and walked around Pham Ngu Lao street, and Nguyen Hue street.

Among all the famous spots they visited, Jace found the country’s war museum as the most memorable part of the trip. According to him, he “realised how strong the Vietnamese were at fighting for their freedom and retaining their rich culture.”

Perks and benefits unlike any other

Aside from Jace, Cloud Employee has been sending developers and IT professionals abroad to explore different cultures and meet other tech talents from different countries.

QA Engineer Jasmin (in blue) and .NET developer Robert (in black) on their way to Mt. Snowdon in Wales.

In May, three employees travelled around the UK and climbed Wales’ highest point (you can watch the viral video of the team at the summit here). Recently, two developers toured around Sweden and experienced all things Swedish—from a meal at Heaven 23 to a thrilling Valkyria ride at Liseberg amusement park.

Aside from the overseas trips, Cloud Employee also offers fun perks and company activities you don’t often see in IT companies.

As a UK-managed IT outsourcing company, Cloud Employee steers away from the stereotype of boring IT offices. Their offices offer areas where the developers and the staff can take a break and de-stress—from foosball, to darts, to an Xbox, and more.

The company believes that a happy working environment is an important key to success, and so they have been active in organising activities that let the employees have fun and build camaraderie among themselves. Every month, the company holds tournaments of various sports wherein employees get to team up and compete with each other. There are also themed “Foodie Fridays” and “Social Fridays” that let the employees enjoy the coming weekend over free food and drinks.

From the simplest perks to the grandest, Cloud Employee has committed to help its tech talents be happy and engaged in their work, and ultimately, be globally recognised workers.

For the employee benefits, developers and staff also enjoy professional support for training certification, scholarship to their dependents, and various health and wellness memberships, aside from the standard medical and dental plans.

More than just a trip

The whole experience was more than just a free trip abroad for Jace; it was a trip full of “learnings and realisations”.

On the surface, the trip exposed him to a culture and history he hadn’t known deeply before. His visit to the war museum let him see how much the Vietnamese were proud of and passionate about their culture that they were able to preserve it.

On a deeper level, the trip not only exposed him to the world but also helped him reflect on himself as an individual and as a developer.  “(Like) Vietnam’s culture and history, I learned to be proud of the things I have created and to be passionate of the things I will continue to create because I know it’s the result of my skills and hard work.”

Jace says that the Vietnam trip was a one-of-a-kind experience to share with the CEO—an experience that he will always remember. Aside from the refreshing and inspiring travel, Jace says he is grateful to have spent time with Nick as he learned a lot from him and he inspired him to work on his websites to the best of his abilities. When asked about the overall experience, Jace is more than thankful for the opportunity he’s been given at Cloud Employee.

“I like Cloud Employee not only because (they) offer great career opportunities, but also because the environment and the people also help (me) grow (as a person). Also, I believe in (the company’s) vision (of) delivering the best (services) it could give to the world and how it promotes how skilful Filipinos are.”

Cloud Employee is the UK’s leading IT outsourcing service provider helping startups and SMEs in Western countries find skilled tech talents in the Philippines fast and risk-free. Need to hire a developer or a development team? Learn how Cloud Employee works, see our Developer Pricing Guide, or talk to us.