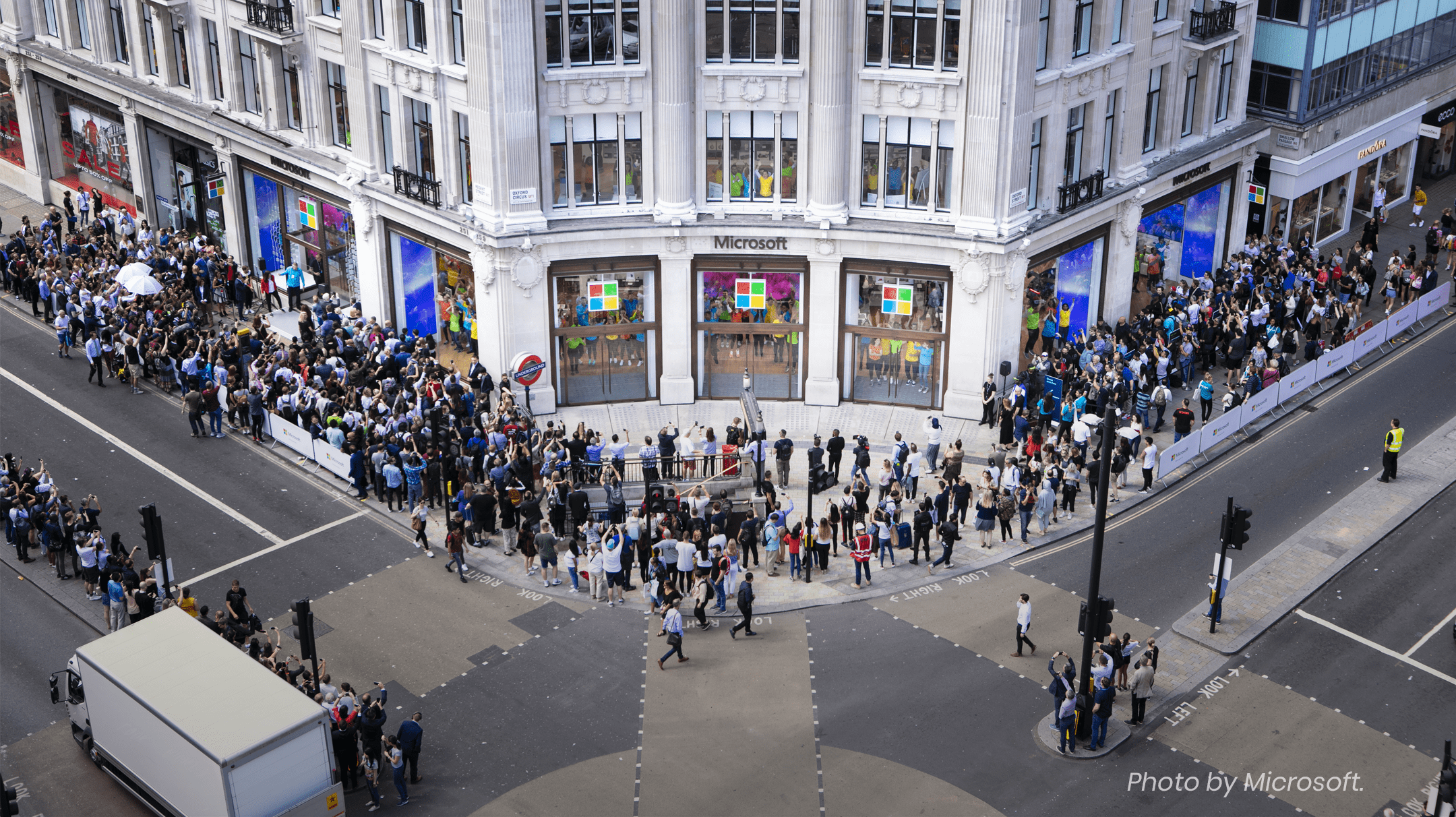 The building is listed and protected by English Heritage, a charity managing historic buildings, monuments, and places. That’s why the store’s facade and interior features a historical twist.

These twists include restored lead windows and ceiling from the 1920s and pillars inside the building.

Microsoft UK’s CEO Cindy Rose said that the store appeals to the public, especially to its target consumers—businesses and gamers.

Microsoft has laid down everything it has to offer by highlighting Microsoft’s Surface tablets and computers, HoloLens headset, and Xbox, among others.

As such, without further ado, let’s take a step inside the Microsoft flagship store in London.

Guests are welcomed with striking 4K video walls featuring promotions such as Surface and Minecraft ads among others. These can also be found in other Microsoft stores.

Meanwhile, guests can try an AR experience of Oxford Circus and check out Microsoft’s latest products such as the Surface Pro 6, the 28-inch Surface Studio, and more. Aside from these, there are also collection desks for online orders.

Right at the corner, visitors will find a real £750,000 McLaren Senna sports car that’s connected to Forza Motorsport 7—and yes, guests can take it on a virtual ride. The sports car has been modified to move and vibrate and even include Xbox buttons connected onto the gas tank.

The ground floor serves to wow and welcome visitors, but Microsoft has more in store in their upper floors.

After going up the swooping central staircase, visitors will find Microsoft’s Answer Desk (Microsoft’s live technical support) on the second floor. There are also areas showcasing laptops from HP, Asus, and Razer, Xbox hardware, and accessories for Microsoft Surface.

Sharing the floor space is a community theatre which will be used to host free classes for local students and teachers about tech, coding, and STEM.

However, what stands out on this floor is Microsoft’s gaming area, which covers a third of the whole floor. Guests can find 15 Xbox One stations and Xbox-themed gaming chairs, Turtle Beach headsets, and even Acer’s extreme gaming chair, the Predator Thronos.

Aside from these, inside, there’s also a Surface Design Lab where guests can have UK-themed designs etched onto their Surface Type Cover. The second floor also has a red London Post Box integrated with a Surface Pro.

Microsoft also has Surface Hub 2 devices mounted on the walls allowing visitors to know what it feels like to work with a collaborative PC.

After all of these, there’s one last floor guests can visit to complete the whole Microsoft experience.

To top off Microsoft’s London flagship store, the final floor moves away from retail and transforms into a business area used for demos, presentations, and training complete with event spaces and meeting rooms.

In fact, just this weekend, Microsoft did an Xbox showcase so the public can try their upcoming products and services such as the xCloud game streaming service. The company will definitely use this floor to present their latest hardware such as the Surface Hub 2 or HoloLens 2 to businesses and customers.

The floor also has a Carlsberg beer bar featuring Microsoft’s beer-brewing tech. Two years ago, the Danish brewer partnered with Microsoft to use AI in detecting flavours and aroma to develop new and better beer.

Designed to connect with the community

According to Microsoft, launching a flagship store in London has long been part of their vision to establish their physical and digital presence to consumers and businesses, and ultimately, deepen their connection with them.

As such, the company builds a space where people can see and interact with their latest hardware and software.

In addition, Microsoft also announced that they will be donating £1m to the UK Youth, The London Community Foundation, and the Raspberry Pi Foundation. These charities also support community groups with digital and employability skills.

With more than 4 million people visiting the famous shopping street each week, Microsoft’s London flagship store will definitely be busy. However, its success might not mean that more Microsoft stores will pop up across the UK.

Microsoft has yet to comment on future plans, but it's clear that future stores will be based on what the London flagship has: a mix of gaming, enterprise, and Microsoft Surface, all under one roof.

How do you launch a successful software or app against a tight competition? The answer: work with dedicated and highly skilled tech talents. Cloud Employee helps you find top tech talents at competitive costs. You can hire dedicated offshore developers with us across many technologies. Talk to us, learn more how Cloud Employee works, or see our Developer Pricing Guide.