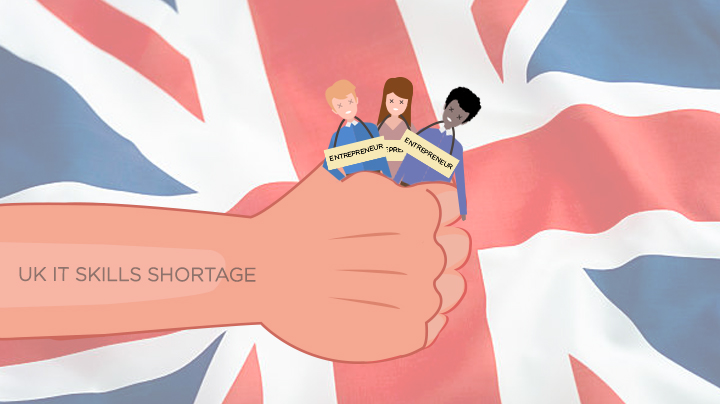 The High Cost of UK IT Skills Shortage

With technology at the heart and the backbone of many businesses today, there is a growing demand for IT professionals across industries worldwide. The shortage is most pronounced in the tech sector itself in western countries.

The UK, in particular, faces a severe shortfall in digital and tech skills, endangering its status as Europe's top tech hub in the coming years.  As early as 2011, e-skills UK (now Tech Partnership) had reported on the demand of 110,000 jobs in IT and predicted that IT employment will grow at 2.19% a year over the next decade - five times faster than other job markets. In 2013, an estimated 750,000 digital skilled workers will be needed by 2017 according to an O2 Survey.

The high cost of IT skills shortage

British firms now struggle with the talent deficit. The skills gap now costs businesses more than £2bn a year in higher salaries, recruitment costs, and temporary staffing bills, according to research by the Open University.

In a recent study released by the British Chamber of Commerce, more than half of 1,400 businesses surveyed across the UK identify the current skills shortage as increasing staff workload, with 29% of the respondents stating that the shortage leads to higher operating costs, while a further 28% say that it causes difficulties in meeting customer requirements.

That the skills gap has a damaging effect on the productivity of companies is something that IT leaders, specifically CIOs know. Gartner's 2016 survey of 2,944 CIOs across 84 countries found that 22% of CIOs find talent shortage the biggest barrier to their success as CIO while around 60% of CIOs surveyed in the Harvey Nash / KPMG 2017 CIO Survey report on the continuing IT skills shortage. The latter survey shows that this has been a perennial concern since 2005, raising the idea that the tech skills shortage is now a new level of normal.

The skills shortage is also compounded by other issues that the UK now faces: visa restrictions on skilled foreign workers, the declining STEM skills among its population, and the uncertainty that Brexit means for its highly international tech workforce. With the IT skills shortage strangling the growth of UK tech businesses, how to move forward?

Recognizing those factors pose significant risks for the sustainability of UK's tech business community, the Coalition for a Digital Economy (COADEC) a leading policy voice for tech startups, released a report to avert the skills crisis.  They outlined key recommendations to boost STEM skills, attract global talent, improve funding for UK tech sector, and secure trade agreements with the EU and US.

One key proposal is a call on the government to further expand software development apprenticeships,  and move to a system which makes STEM subjects especially mathematics compulsory for 16-19-year-old students. COADEC's overall recommendations require long-term investment from the government in education, investment spending, and touches on immigration and trade policies.

Currently, the tech sector relies heavily on a foreign workforce. Alongside having an international tech talent working domestically, many companies turn to IT outsourcing service providers to remain competitive. UK businesses wishing to outsource their IT function or software development projects may find that UK-managed offshore IT partners are an excellent option. The key is to find the right IT offshoring partner that understand the needs of startups and tech firms, giving the advantages of IT outsourcing while cutting out the risks.

Cloud Employee came up previously with an infographic on UK IT skills shortage.  In the two years that passed a lot has changed in the tech industry. Here is our 2017 version of the infographic.

Shortage
IT Professionlas
IT Outsourcing Partner