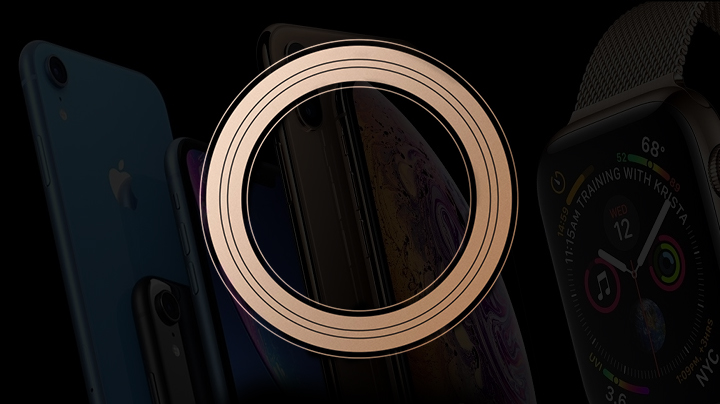 Here's what went down at Apple's 'Gather Round' iPhone launch

Apple’s event on 12 September 2018 at the Steve Jobs Theater in Cupertino, California unveiled the tech giant’s three new iPhones as well as the new Apple Watch. The “Gather Round” iPhone launch lasted for about two hours and we’ve summarised all the announcements and updates you need to know in this blog.

First to be revealed during the event was the new Apple Watch Series 4, which is packed and loaded with improved specs and impressive health features.

Because of its zero-bezel design, the new Apple Watch series increases its face size to 40mm and 44mm, sporting a 30% larger screen than its predecessor. This display stretches all the way to the edges and shows more information with a batch of new watch faces.

What stands out the most among the new features for this new Apple Watch series is its health-focused features, such as breathing exercise guides, fall detection, irregular heart rate detection, and most importantly, the electrocardiogram (EKG), which is a first in smartwatches. Apple received clearance from the Food and Drug Administration for its EKG, which makes the Apple Watch Series 4 the first direct-to-consumer EKG wearable.

The EKG feature measures the electrical activity of a user’s heartbeat to help diagnose heart disease and other conditions anytime, anywhere. The information will be stored in the health app, and users will be able to share the EKG with a doctor for a more in-depth diagnosis.

The fall detector is another useful feature which detects when you fall with its new accelerometer and gyroscope. After detecting a fall, the smartwatch initiates an emergency call; it automatically calls and sends a message to our emergency contacts if it senses that you’re immobile for 1 minute.

The upcoming watchOS 5 update includes improved activity tracking and automatic workout detection. The Apple Watch Series 4 will run on watchOS 5 right out of the box.

Along with the flagship phones, the new A12 Bionic chip was also introduced. It’s Apple’s first 7-nanometer chip which will power the iPhone XS and the iPhone XS Max, promising graphics performance improvement by 50%.

Schiller also proudly presented the two phones’ IP68 rating, which means that the devices can withstand dust, dirt, and sand, and are resistant to submersion of up to 1.5m underwater for a maximum of 30 minutes.

Another exciting feature of Apple’s flagship phones are the improvements in the camera tech. One, the true tone flash has been updated; two, there’s a larger sensor in the 12MP wide camera, and; third, there’s a faster sensor in the 7MP front camera. Both the iPhone XS and the iPhone XS Max also support blur adjustment which allows users to make adjustments after the photo has been taken.

Lastly but most importantly, the iPhone XS and XS Max have dual-SIM capabilities through the eSIM technology. Since eSIM is not supported in China, Apple will include two physical SIM slots.

To complete the show, Apple introduced the iPhone XR—a cheaper way for users to get their hands on the iPhone X-design. The iPhone XR comes in a large 6.1-inch display and in 6 new colours: white, black, blue, yellow, coral, and red.

It’s still similar to the iPhone X, but it features a bunch of downgrades such as an LCD display with a 1792x828 resolution (instead of OLED) and a single-lens rear camera. Aside from these differences, the iPhone XR is still powered by the same A12 Bionic chip, has the same AI-driven camera features, and still supports wireless charging and Face ID authentication.

In addition to the three iPhones and the new Apple Watch, Apple dropped bits of extra info throughout the Gather Round event.

According to Apple, the HomePod smart speaker will soon support phone calls from a connected iPhone. Also, Siri will soon be able to converse in Spanish, answer questions, and search for songs using lyrics. It will be released in Mexico and Spain on 26 October this year.

During the annual WWDC developer event last June, Apple released beta versions for iOS 12, watchOS 5, macOS Mojave, and tvOS 12. While iOS 12 and watchOS 5 will be launched today, 17 September, Apple revealed that tvOS 12 will also be revealed today, and macOS Mojave on 24 September.

Discounts and the end of older models

Along with the launch of new iPhones, Apple announced big discounts on older models as well as the killing off of much older ones. Both the iPhone 7 and the iPhone 8’s prices went down by $100 / £100. Moreover, Apple will no longer sell the iPhone SE, iPhone 6s, Apple Watch Series 1, and last year’s iPhone X. It’s also worth noting that there has been no mention of the AirPower again.

What to watch out for

Apple’s Gather Round event surprisingly did not mention any updates to the iPad Pro and MacBook range. Now that the September event is over and there are still updates and devices people are expecting to see soon, we can’t help but wonder if Apple will hold a smaller event in October for this. In the past, Apple has unveiled iPads and updated Macs in smaller October events, although it doesn’t happen every year.

While it’s still unsure whether Apple will return next month with a handful of updates and new devices, we’re expecting a number of announcements, such as updates to the iPad Pro, new AirPods (and maybe a new charging case), updates to the MacBook Air, a 13-inch MacBook, updates to the Mac mini (which hasn’t been touched since 2013), and updates to its range of iMacs.

Want to see more tech news and articles on your feed? Follow Cloud Employee on Facebook, Twitter, and LinkedIn for our latest updates and job postings. Looking to work in tech? Send us your updated CV to [email protected] with the position you're applying for in the subject line.