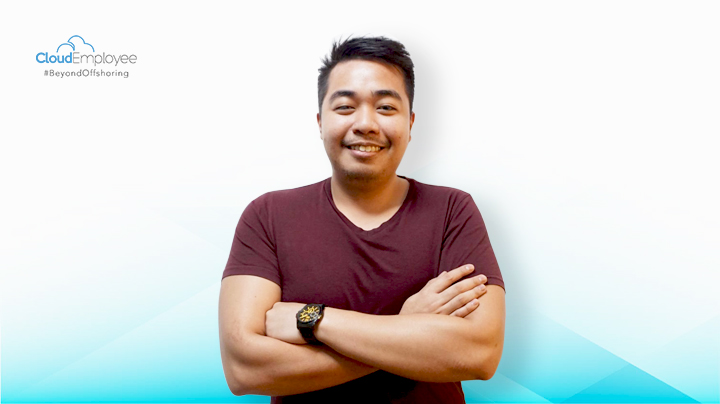 Hailing from the streets of Tondo, Manila, 24 year old Game Developer Neil Jason V. Tan Lee or more informally known as Jason has been with Cloud Employee for a year and 8 months.

Having joined the team in June of 2015, just a couple months after Cloud Employee’s humble beginnings, he’s seen the company grow through the years. Today, we shine the spotlight on him and talk about his latest project Hyperstellar: SV.

When was the first time you realized you wanted to become a game developer?

I think I always knew I wanted to become one. Growing up, I was a really energetic kid who loved to play outside with my friends and watch cartoons and anime. I formed my passion for video games when I became old enough to play games, but I always liked the idea of playing or pretending to be a virtual character.

My tip for aspiring game developers or those who are just starting out is: 1) To always have the hunger for learning, 2) Strive to be the best at your craft and 3) Always find a way to be more efficient. These are my three main tips, but above all: love your work, because if you love your work these three tips will come naturally.

What made you decide to work at Cloud Employee?

I found out about CE on Facebook, I think. At that time, the Manila branch was just starting out. I joined because I saw the potential for me to grow as a game developer here.

What’s it like working at Cloud Employee so far?

It’s been amazing! I remember when I was first hired and our office was just a small room with a team of less than 10 developers, but now we’re over 100 with two big offices here in Makati and another in Cebu. I see how the company has grown, the obstacles it had to overcome and I’m happy to be part of it.

So no more “tough schedule” problems?

Yes! I work a shift of 3pm to 12 midnight from Mondays to Fridays. I finally have the weekends all to myself!

Walk us through your day.

Well first of all, I’m a Senior Game Developer and my client is Altered Gene Studios. We mostly do mobile games but we also do PC, VR and TV. I’m the one who implements features, gameplay, and UI (User Interface).

The first thing I do when I arrive at work is I check my emails while sipping a cup of tea or coffee (it depends on my mood that day). Next, I’ll organize my tasks for the day and then I’ll tick my task list one by one. When I’m done with all my tasks, that’s when I call it a day.

Tell us about Altered Gene.

Altered Gene is a London based company owned by Des Gayle (my boss). He’s an awesome guy, very kind and understanding. So far, we’ve released a game called Hyperstellar: SV.

What kind of game is Hyperstellar: SV?

It’s our first in-house game released on Altered Gene. It’s basically an endless space shooter game. You play as an Elite SV (Solar Vanguard) Pilot and battle the evil forces to restore peace in the galaxy.The objective of the game is to destroy as many enemy ships as you can so you can earn coins to upgrade your ship; you can also collect fuel, which will activate your ship’s special weapon. We’ve also threw in a couple surprises in the game, but you’ll have to download it and see for yourselves.

Well, we started planning the game around 2015 Q4 (fourth quarter of the year). Then, it was still called Hyperdrive. We wanted to release the game right away, but we didn’t release version 1 until 2016 Q3, because we didn’t want to release a game that’s half baked. We were also juggling other projects at the time so it did take a while for Hyperstellar:SV to come out.

What’s the best part of having created the game?

The best part for me was seeing it all come together. I’ll never forget when it was still in the development stage and I kept bugging my coworkers to test and play the game on their devices. When the game was released, of course I asked the same coworkers to try the game and it was rewarding when they told me they liked the end product. It still makes me happy until now.

What was the hardest thing you had to overcome in making the game?

Probably the biggest challenge in making the game was in creating the multi-platform support. We did this because we want everyone to experience and enjoy our game, but it wasn’t easy to make!

What are the highlights of the game?

Tell us about the incoming update.

We’ve got a lot of feedback from our players with our initial release in 2016. We value our players opinions so in the upcoming update we’ve decided to overhaul the whole UI design and improved it’s flow and feedback. We’ve also updated some gameplay behaviours like the missiles’ firing animations.

- It’s FREE! You can download it at IOS App Store, Android Google Play and Amazon. It’s a game you can play anywhere, and the best thing is you don’t even need internet connection to play. I just hope everyone who plays it has as much fun as we did making it.

Lastly, what other games should we be watching out for?

Along with the update of Hyperstellar: SV, we’re going to release a new game called Redzone Runner. It’s a 3D casual American football game. If you’re a fan of NFL, you should definitely try it out. It’ll be available for download on the IOS App Store and Android Google, but for more info you can check Altered Gene’s Facebook and Twitter.

Are you looking to create cool games like Hyperstellar:SV? Join us at Cloud Employee! Follow us on Facebook, LinkedIn, and Twitter for our latest updates and job postings. Send us your updated CV to [email protected] with the position you're applying for in the subject line.