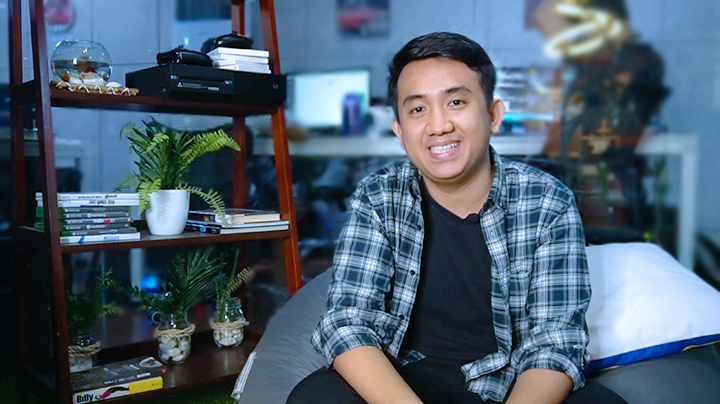 Who doesn’t like movies? From the classics to the recent blockbuster movies, iOS developer Erwin Acosta knows it all and, most likely, has seen them all! Besides being an awesome iOS developer, Erwin is a huge movie buff.

But, before we get on to the full interview, get to know Erwin up close and personal in the short clip below.

Just a few things about Erwin

How long have you been at Cloud Employee?
Turning 3 years next month.

What is your position?
I'm working as an iOS Developer for my client, The Beans Group.

How did you get into iOS development?
I've applied as an intern in a start-up company who's looking for a mobile developer. I was given the opportunity to learn iOS development and then work on a project. Since then, I've decided to become a mobile developer because I enjoy developing apps on iOS and I love seeing people download and use the apps that I've created.

What’s the latest movie you watched? Is it good?
I just rewatched Blade Runner 2049, It’s a sequel of a 1982 Sci-Fi classic, Blade Runner starring Harrison Ford. The visuals and cinematography are stunning. A must watch for Sci-Fi fans!

What movie genres are you mostly into?
I became interested in Sci-fi, Action, Crime, and Drama by watching the works of Stanley Kubrick, Quentin Tarantino, Steven Spielberg, Martin Scorsese, Ridley Scott, and the Coen Brothers. (Not much of a horror fan. :D)

What’s the ultimate movie plot twist you’ve ever watched?
I would choose the movie Memento by Christopher Nolan.

(SPOILER ALERT!) It's a story of a man who suffered short-term memory loss after the murder of his wife and as he investigates his wife's murder. He used tattoos, notes, and photographs to remember the clues. Only to find out later that he's the one who's responsible for his wife's death. Another interesting fact about the movie is that the coloured scenes are shown in reverse order while the black & white scenes are shown in chronological order.

Other movies on my list are: The Usual Suspects, The Prestige, Shutter Island, The Sixth Sense, and Fight Club.

Which movie character would you relate yourself to?
Maybe a mix of “The Dude” from the movie the Big Lebowski who’s a chill/easy-to-be around person and then Peter Quill/Star-Lord from GotG, adventurous, goofy, and also a music lover!

Any other interests?
Aside from watching movies, playing video games, and listening to music, I try to stay active by running, playing sports, and also hiking whenever I get an invite from my friends.

Your life at Cloud…

Walk us through your day. What’s a typical day like for you as a developer?
I'll start by greeting and reporting to my client, buy food to get some energy, start listening to some music while checking out news about tech and current events, and then proceed to my programming tasks.

What is the best thing about your job?
Having the chance to work with people from other countries and from different cultures and having the opportunity to soak up knowledge from my foreign teammates and colleagues here at Cloud Employee.

What is something your office mates don’t know about you?
I'm a big fan of rock and has a bit of an old school taste in music. (laughs) I love listening to the music of some of the bands from the early 2000s, '90s, and all the way back to the '70s.

How do you beat work distractions or boredom?
You'll see me wearing my earphones/headphones listening to music whenever I need to focus on coding. I would then play foosball, or chat and joke around with my colleagues when I'm bored. :)

How are the people at your office?
People are nice and friendly. The new guys are usually quite shy. So as one of the few guys that's been here for a long time, I try to approach and greet some of them whenever I have the chance. :)

What’s your most memorable moment at Cloud Employee?
Winning office games! I've never been that lucky with games before. It was a fun experience! (laughs)

What made you decide to work here?
I like the fun and positive atmosphere around here. Very different from the usual corporate environment or setting.

What do you love about Cloud Employee?
I love the awesome events and activities being held here every month such as office games, social and Free Food Fridays. It creates a fun working environment and culture.

What are your three tips for aspiring iOS developers?

Team up with awesome iOS developers like Erwin! Learn how Cloud Employee works, see our Developer Pricing Guide, or talk to us. You can hire dedicated offshore developers with us across many technologies.