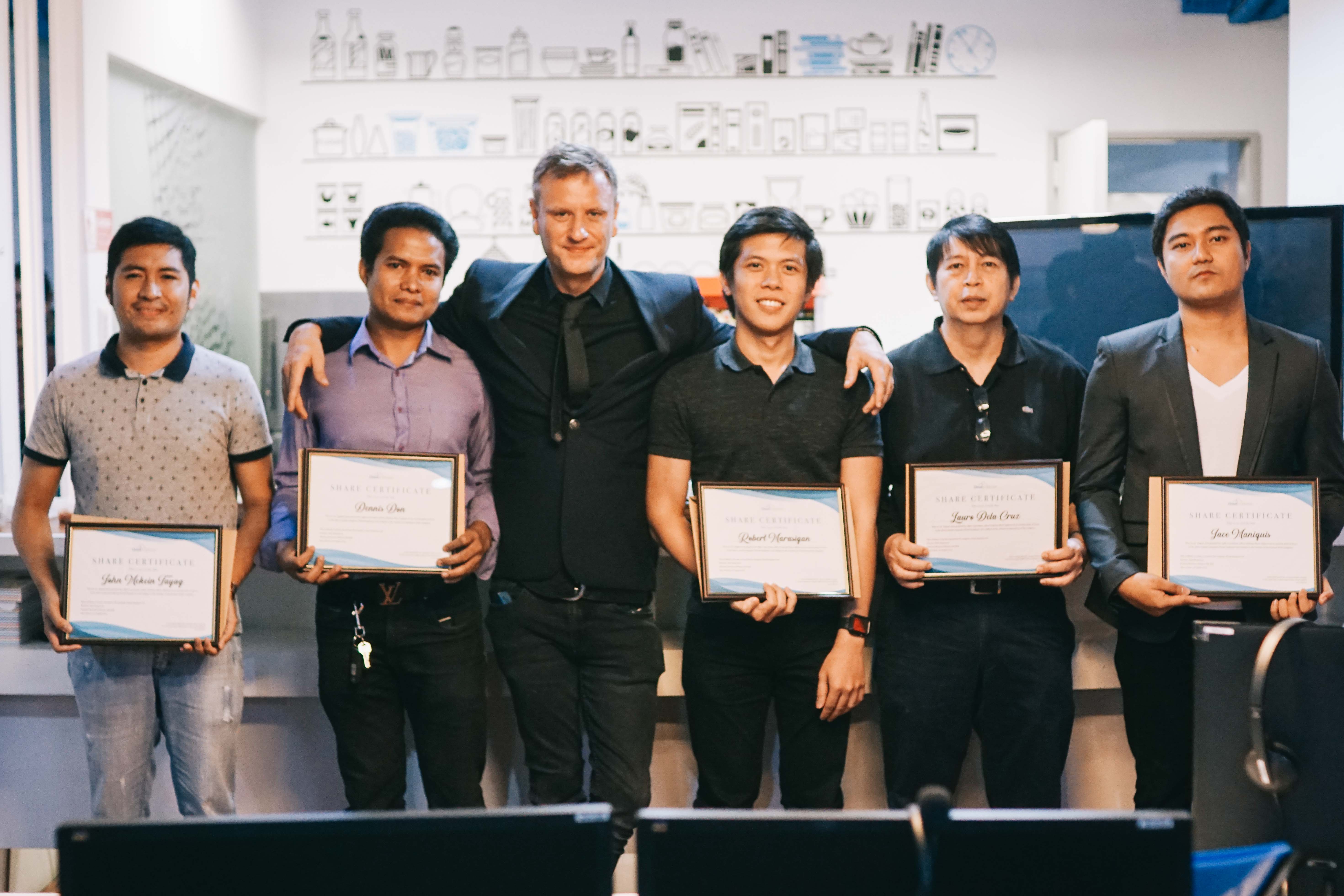 From Wednesday dinner nights with developers to celebrating a momentous milestone with the first members of the 3 Up Club with a trip to Taiwan, Cloud Employee, a British-headquartered remote IT staffing company, took it a step further with the announcement of employee share-option schemes last August.

During Cloud Employee’s monthly Social Friday event, CEO and Co-founder, Nick Hargreaves personally announced the employee share-option schemes he and CFO and Co-founder Seb Hall have been working on.

Hargreaves awarded the first five members of the employee share scheme, offering company shares from the UK parent company. The people who have been awarded are loyal Filipino IT developers that have been with the company for more than four (4) years.

“The long-term goal (of the employee share-option schemes) is to allow talented and dedicated employees to own part of what they have worked tirelessly to build,” says Hargreaves.

“Treating outsourced staff as professionals, giving them opportunities and share (options) in a business they help build, for me, is just the right thing to do. It’s also another positive action that we have done to bridge the talent gap that the IT industry is experiencing all over the globe.”

The latest share scheme allows employee shareholders to have a stake in the company they have devoted their time and energy to incessantly actualise the future of IT outsourcing.

Like Hargreaves and Hall, leaders and founders of companies around the world have implemented an ESOP as a means to empower employees from the bottom-up and ultimately increase productivity.

But what is ESOP?

Investopedia defines an ESOP as the abbreviation of the employee stock ownership plan, also known as employee share-option schemes. It’s an employee benefit plan that gives employees an ownership interest in the company. It’s also a corporate-finance strategy that benefits both parties as employees become shareholders, thus aligning the interests of the company and the employees.

In a 2013 research journal written by Marcel Ngambi and Frederic Oloume, they cite multiple sources in their research that there is a positive link between the implementation of employee share-option schemes and a company’s performance.

From an article published by Employee Benefits, former head of employee share ownership at IFS ProShare—a non-profit membership organisation under the School of Finance that gives a voice for the Employee Share Ownership (ESO) industry—Alan Scott affirms:

“Even in times of economic stress, employee share ownership is an effective vehicle for increased productivity. Employees who participate in a share plan are usually more productive than employees who don’t, even within the same company.”

However, Nigel Mason, co-founder and former director of Capital Strategies Group, an insurance firm, asserts: “(There is) a correlation between employee share ownership and investment performance, but that’s not the same as cause and effect. For example, employers with employee share ownership may just happen to be in (a) strongly performing sectors.”

Ngambi and Oloume note that articles on the correlation between employee stock ownership and company performance are debatable due to the ambiguity of the results as a collective—meaning any research done can either conclude the positive or negative effects of the employee share-option schemes.

The debate on the positive or negative effect of employee stock ownership plan stems mainly from the economic context of the subject company. That’s why it’s important to factor in the company’s condition such as the maturity of the business environment, and the presence and function of financial markets.

It’s difficult to fully assess the true impact of implementing employee share-option schemes because these are not launched, or done, in a vacuum. Often, it’s a part of a strategy to increase employee engagement and empowerment through reward—and ultimately the increased overall performance of the employees.

That said, it’s undeniable that the implementation of an employee stock ownership plan has a strong link to the performance and value of a company.

In 2014, Employee Benefits reports the UK’s top 50 employee-owned businesses—with 25% to 100% of the organisations are by employee stock ownership—have seen a year-on-year increase in productivity by around 4.5%. Those companies performed better in comparison to the UK’s economic productivity on that year.

For Cloud Employee, implementing employee share-option schemes isn’t only about increasing the performance and value of the company. It’s about thanking the people, the IT developers who have been with the company through thick and thin after all these years.

“Our people are our business. We wanted to back up these words with action”, says Seb Hall. “We wouldn’t be where we are today without the dedication and hard work of the team…”

What’s in store for Cloud Employee?

With the announcement of the employee share-option schemes, there is no doubt that Cloud Employee’s performance and value in the following years would only continue to rise.

In the first semester of 2019, Cloud Employee has seen a meteoric rise of nearly 80% growth alone. The striking rapid growth for the British IT staffing company led to acquiring two more office spaces to accommodate the influx of new dedicated developers.

Furthermore, Cloud Employee has expanded its client base beyond the UK and reached to other Western countries such as Australia, Canada, Germany, the Netherlands, New Zealand, Sweden and the USA.

The future is not set in stone but with the company’s present performance the possibilities are bright and expansive. As Hall says:

“We have a business plan over the next five years to further innovate outsourcing and to solidify ourselves as the number one provider of high-level IT talent in the Philippines. We want our staff to join us on that journey and share in the success.”

Interested? Join us and you can also be rewarded with employee share-option schemes in a few years. Check our Careers page for our latest job postings or send us your updated CV to careers@cloudemployee.co.uk with the position you're applying for in the subject line.