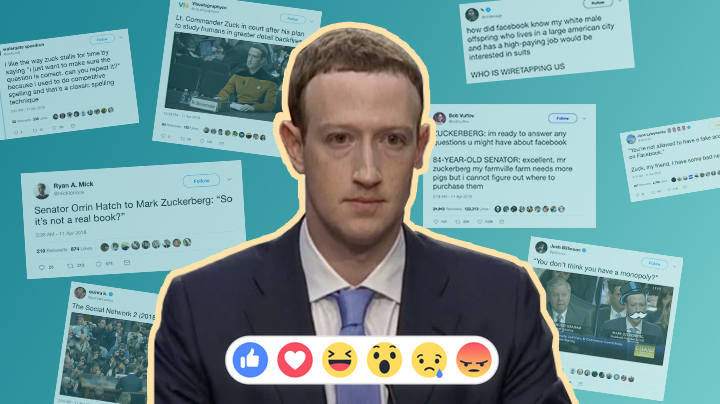 20 Most Entertaining Tweets from Zuckerberg's Hearing

Facebook CEO Mark Zuckerberg has been in the hot seat this week as he spoke about the Cambridge Analytica scandal and data misuse in a two-day Congressional hearing. The issue sparked when the social media giant admitted that 87 million users have had their personal information misused in a political ad targeting.

While it’s a serious matter, some people took to Twitter their witty jokes and memes. We’ve rounded up some of the best tweets here:

Senator Orrin Hatch to Mark Zuckerberg: “So it’s not a real book?”

2: When the Farmville craze isn’t over:

84-YEAR-OLD SENATOR: excellent. mr zuckerberg my farmville farm needs more pigs but i cannot figure out where to purchase them

I appreciate that zuck has eight gazillion dollars and still looks like he got his hair cut by his mom pic.twitter.com/DRS8HOO5WD

Lt. Commander Zuck in court after his plan to study humans in greater detail backfires pic.twitter.com/AqWgzRxBM4

“You don’t think you have a monopoly?” pic.twitter.com/cClSXSoauc

7: Possibly the sequel to The Social Network?

8: Also a pitch for its title:

9: When Zuck’s notes were exposed:

Wow, I didn't realize the notes Zuck used to testify were already out there. pic.twitter.com/WEQ4mC5Ju5

11: There’s also the “Facebook secretly listens to you” conspiracy:

WHO IS WIRETAPPING US

“Mr. Zuckerberg, a magazine I recently opened came with a floppy disk offering me 30 free hours of something called America On-Line. Is that the same as Facebook?” pic.twitter.com/U7pqpUhEhQ

Who will be the first senator to ask Zuckerberg why their grandson won't accept their friend request?

14: And someone noticing Zuck's technique:

I like the way zuck stalls for time by saying "I just want to make sure the question is correct. can you repeat it?" because i used to do competitive spelling and that's a classic spelling technique

15: When the Memories feature can remind you of unpleasant experiences:

If you’re feeling down, remember that in exactly 4 years Mark Zuckerberg is going to get one of those “Hey check out this awesome memory!” Facebook posts and it’s going to show 15 photos of him looking sweaty and miserable while being shouted at by Chuck Grassley

16: When a user made a rundown of all the events:

CONGRESS: “Send Zuck to us - we shall get to the bottom of this for the American people.”

SENATOR TO ZUCKERBERG: “Mr. Zuckercorn, when did you invent the Spacebook? Do u pay for it with chocolate? I like birds.”

Zuck, my friend, I have some bad news.

"It's the Senate hearing with hot questions and even hotter wings" pic.twitter.com/oEDnihikH0

19: Losing the social media war has its upsides too:

tfw you aren't being grilled by the Senate Judiciary Committee pic.twitter.com/0gbOmDtJq8

20: And finally, when Jim Carrey decided to join in:

Congress gets a visit from planet Zuckerberg. “I shall prevent any further election meddling by destroying the Earth with my Illudium Q-36 Explosive Space Modulator App! The sudden drop in Facebook’s stock has made me angry! VERY ANGRY INDEED!!!” pic.twitter.com/qwCpJoUqnS

Improve your career today and join us at Cloud Employee. Follow us on Facebook, Twitter, and LinkedIn for our latest updates and job postings. Send us your updated CV to [email protected] with the position you're applying for in the subject line.