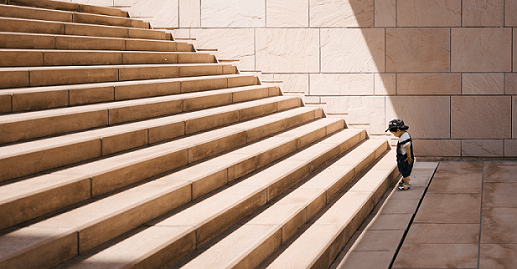 Is failure the key to career growth?

Unfulfilled goals are commonly seen as a hindrance to career growth.

Regardless of whether you're an entry-level or seasoned employee, failure is often seen as a step back rather than a step forward.

As a result, many individuals end up not going after a challenge or trying something new for fear of failure.

A survey ran by Global Entrepreneurship Monitor (GEM) called the Adult Population Survey (APS) focused on entrepreneurs and the certain traits which lead them to either back out or start their own business. GEM found that in the United States—the world’s largest economy—15% of the population’s entrepreneurs were fearless, and 33% were fearful of starting a business.

Despite having a majority of self-made billionaires in the US—62% calculated by information services firm Wealth-X—many are still less likely to take risks for fear of failure.

But the question is this:

Is running away from failure truly the solution to career growth?

“The phoenix must burn to emerge.” - Janet Fitch

If you want to grow in your career, you have to realise that failure is inevitable. You must go through the motions to learn how to get better at what you do.

Instead of sprinting away at the second things don’t work out, try to SEE IT THROUGH.

Failing is part of the process

To become exceptional, you must try and try—and try again.

Think of it this way:

You didn’t start playing sonatas the first time you played the piano. You started with the basic exercises and took on more complicated pieces as you go. It takes practice to get better at something, and part of the process is going through bumps and pitfalls along the way.

A study by Oswald et al. reviewed 88 studies that investigated on relevant research on practice predicting performance in areas like music, games, sports, education, and other occupational domains. The findings showed a direct correlation between practice and performance.

Oswald said, “Deliberate practice was a strong overall predictor of success in many performance domains, and not surprisingly, people who report practising a lot generally tend to perform at a higher level than people who practice less.”

As you take on the next challenge, you keep adding on to your level of experience and skill, accomplishing greater feats at every stage along the way.

Remember: failure is part of your journey to successful career growth and development.

Related: How to Stay Motivated at Work When Things Become Unbearable

Looking for career growth opportunities? It may not seem like it, but failure allows you to grow.

Failure is inevitable. Things can go either way, successfully or unsuccessfully.

However, don’t let the possibility of failure stop you from going after what you want. Instead, think of failure as a learning curve—a lesson rather than the end-all-be-all.

Unexpectedly, one of Cofinity’s features, the ability to make online payments, gained the attention of eBay users. Many of them emailed Levchin about developing a safe online payment feature on eBay. Despite the positive attention, Levchin ignored those emails for 6 months and remained focused on Confinity becoming a Palm Pilot operating system company.

Eventually, things didn’t fall through for Cofinity and he moved on to a new venture—eBay payments technology.

Although his first project didn’t succeed, he developed groundbreaking ideas like ‘online payments’ that had great potential. By failing, Levchin learned and found his new business venture—PayPal.

Remember: With every challenge you take, you grasp new information that can help you do better the next time around.

Related: How To Work With People You Don't Like

Failing draws out your creativity

When things don’t go as planned, push yourself to find an alternative path.

To figure out how to get around a certain situation, draw out your creative side and allow yourself to think more outside-the-box to find a better solution.

Part of the creative process is finding different passages and entryways to solutions. Despite the uncertainty, your experience throughout the process can lead to bigger and brighter ideas—which can ultimately lead you to success.

According to Hilda Burke, an integrative psychotherapist and life coach:

“I think it’s innate to want to know the answers, to know whether our efforts will pay off at the outset,” she says. “But, of course, the only way of knowing is by doing and creating. A lecturer once told me that we can be in safe mode or in growth/creative mode — we cannot be in both simultaneously. So to feel anxious on unsteady ground is totally normal and it’s actually inherent in the creative process.”

That said, to attain growth, you must start doing or creating no matter the outcome. It is inherently part of the creative process.

Another thing to keep in mind: failure helps broaden your mind to potential new threats and the escape routes available to counteract these threats.

When things go south, your mind is enlightened with new thoughts, perceptions and possibilities, making you a whole lot more creative in the end.

Turn your disappointment into a second chance for a better opportunity.

With every career move you make, don’t let the fear of failure hold you back from taking on new challenges or pursuing unknown paths.

Embrace failure, see what you can get out of the experience to achieve a successful career growth.

Related: How a Clean Desk Keeps You from Being Stressed at Work

Want to be part of an ever-growing team of highly skilled IT developers? Send us your updated CV to [email protected] with the position you're applying for in the subject line. Follow us on Facebook, Twitter, and LinkedIn or check our Careers page for our latest updates and job postings.